Anti-Fascist Action in Olympia: a militant response to police and fascist terror

Earlier this spring on May 21st, two young black men were inside the Safeway on Cooper Point Road in West Olympia. One of them decided there was no point in paying for a twenty-four pack of beer, so they attempted to just walk out the front door with it. But as is so often the case, a Safeway employee who makes less than 15 dollars an hour felt it necessary to prevent this horrible crime. When she attempted to stop the young man, he threw the beer at her and ran away with his friend. As it turned out, these two men were brothers, Andre and Bryson Chaplin. The two of them did not get very far before an Olympia Police Department officer decided to intervene. Judging these two young men by their skin color, he opened fire and seriously wounded both of them. It is lucky that both of them survived. Olympia is a notoriously white town with a police force that is highly racist and violent. 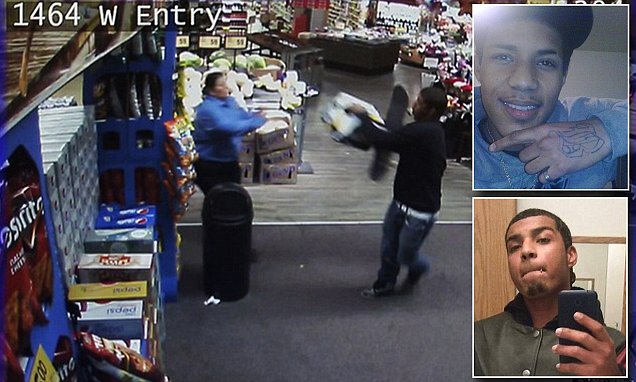 It took many weeks for Andre and Bryson to recuperate from their gunshot wounds. In that time, the Thurston County Prosecutors Office mulled over what action it would take in regards to the shooting. During that same time period, a group of local nazis held a rally in support of the Olympia Police Department. Several of them were severely beaten and chased out of time by a crowd of 300 people. Then, on September 2nd, the County Prosecutor announced that the officer involved in the shooting would remain on the police force and not be charged with a crime. On top of this, the prosecutor announced that Andre and Bryson would be charged with assault on an officer. As soon as the press conference was over, intense anger began to simmer across the little town of Olympia.

On September 3rd, nearly 200 people converge downtown to protest the decision to charge Andre and Bryson. In the middle of a rush hour the crowd blocks the intersection of 4th and Capitol with fencing and construction materials taken from a nearby condo development. The crowd then marches through downtown Olympia, blocking more intersections and giving speeches. Later in the evening, a Ford truck connected to local nazis is seen cruising the streets. When the crowd rushes to attack the truck, the Olympia Police Department arrives to protect the nazis, once again demonstrating their true allegiances to the public. After this incident the truck vanishes and the crowd proceeded to light off fireworks, tag the police stations, and vandalize a statue in front of Olympia City Hall. During the same night, nazis covertly smash the window of an anti-fascists car and get away unseen.

A few days later, nazis announce on their internet forum that they will rally in front of Olympia City Hall to support the police and to applaud the shooting of Andre and Bryson. They set the date for Saturday the 5th of September and an anti-fascist rally is immediately planned in response. 60 anti-fascists assemble and begin to rove through downtown, looking for any fascist presence. One car drove to the march and announced they supported the nazis. Their windshield was quickly smashed and they drove off in fright. When an off-duty Air Force pilot with a Confederate flag on his motorcycle approached the crowd, he was immediately beaten and later hospitalized. The flag was burnt right there in the street and the crowd went on to attack the Olympia City Hall and police station. Several windows were smashed out and paint bombs thrown at the building before the police attacked the crowd with pepper spray and pepper balls. In the end, not a single anti-fascist is arrested. During the entire night, not a single nazi showed their face. 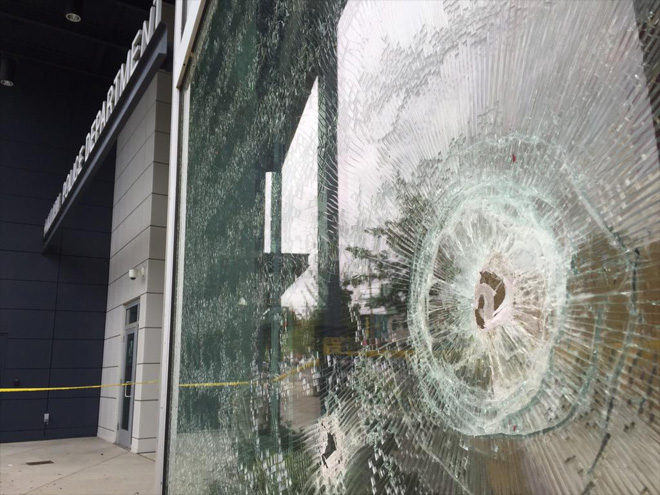 Two days later, a group of 100 people march to the Olympia City Hall and leave flowers in front of the broken windows and boarded up doors. This march is in honor of all the mothers who have lost children to police terrorism. Later that week on September 8th, two dozen people shut down the County Prosecutors office during the morning hours, completely shutting down business as usual. The group demands that the charges against Andre and Bryson be dropped. None of them are arrested. Since the start of the demonstrations, over 500 people have participated in support of Andre and Bryson and the case has garnered national and international attention.

Most recently, on October 2nd, a group of anarchists decided to attack the West Olympia police substation. All of the windows were smashed, the electronic keypads were destroyed, the door locks were super-glued shut, paint and brake fluid was thrown inside the building, and the exterior walls were tagged with slogans like ACAB (all cops are bastards) and No Cops, No Charges. The police were caught by surprise and later told the media that vandals must have been listening to a police scanner, given that no police were in the station at the time. This action received coverage from the local networks and spread rapidly across social media, receiving a generally positive response. 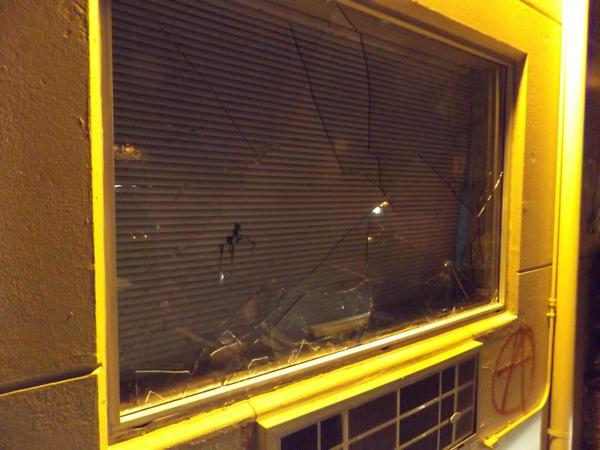 This November both Andre and Bryson had their first court appearance. The date of their trial has been set for sometime in April, 2016. We will provide more updates as the trial looms closer. While the nazis may have been repulsed, it is still very difficult to be black in Olympia, given that it is a mostly white town. Racism cannot be destroyed as quickly as a window pane.

There is only one response to police and fascist terror: direct action. Without an immediate response to racist violence, the fascists will only grow bolder. All of the actions described above are some effective ways to push back against the white supremacist power structure. Unfortunately, Olympia is the exception and not the rule in this case, and many cities allow such indignities to occur without any significant response. But as the United States sinks ever further into a world of racist police terror and violence, we will be seeing more such disturbances across the land.

On October 21, 2015, fascist graffiti was spray painted on the front of the Amor Spiritual Center on Beacon Hill, Seattle. The phrase ‘Hate In Many Languages’ was written in red paint beside a large swastika. Oddly, this was not the traditional nazi swastika but the original Hindu pictograph denoting peace and well being. Combined with the poor hand style of the tagger and a highly visible typo, this racist vandalism appeared to be the work of a deranged teenager acting on some rotten emotional impulse. However, the tagger seemed to have some knowledge of the Amor Spiritual Center, whose slogan is ‘Love In Many Languages.’ After the graffiti was discovered, the entire community was alerted and local anti-fascists conducted a few patrols of the area. The graffiti was taken down within the next few days. 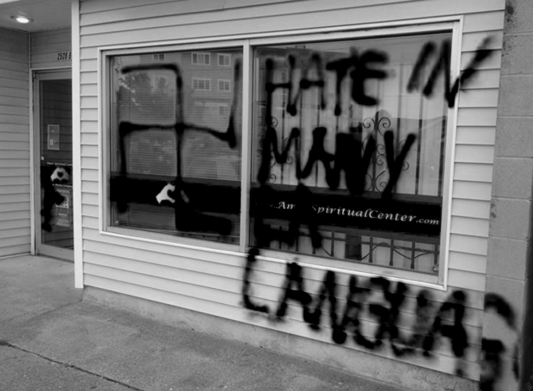 This incident came shortly after another racist episode involving a yoga studio in Rainier Beach. After the Rainier Beach Yoga studio announced it would host a ‘yoga to the people’ event, conservative talk show host Dori Monson went on a rampage of vitriol and reaction. Rainier Beach Yoga planned to offer a yoga class once a week to people of color, hoping to break the white stranglehold on the ancient practice. But once Dori Monson found out about it, he began to spew venom from his pulpit on the 97.3 KIRO radio station. He accused the yoga studio of practicing racism. In his own words: “This yoga class is every bit as racist as a bunch of white people who say they don’t want to be around somebody of color. That’s why I wouldn’t want to attend either one of those classes…the fact is, they are both racist.” 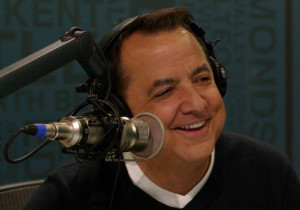 Shortly after his reactionary broadcasts began on October 7th, 2015, the Rainier Beach Yoga studio began to receive angry emails and death threats from Dori Monson’s listeners. The controversy garnered international attention and further revealed the everyday racism practiced in Seattle. The class was quickly canceled due to the threats and the pressure.

We cannot definitively say that these two incidents are connected, but they are certainly part of the same racist spectrum. The person who spray painted the Amor Spiritual Center was about as intelligent as Dori Monson and their hatred was just as base. As we have shown in the previous article, the only way to deal with fascists is to literally beat them and drive them out of town. If these type of incidents are not challenged directly (as they were in Olympia), they will simply keep happening. We encourage everyone to remain vigilant and never ignore events like these, especially when they are happening down the street.

In 1961, the region of North Africa known as Algeria was occupied by the French Army. The insurgency against the French colonists was deadly and cost many lives, but far more deadly was the indiscriminant counter-insurgency waged by the French state and the French-Algerian colonists.

After years of brutal occupation, a large group of Algerians decided to hold a demonstration in Paris. These were Algerians who had legally immigrated to France and worked as maids, servants, waiters, and low paid manual labor. On October 17th, 1961, nearly 30,000 of these Algerians marched on Paris and demanded an immediate end to the occupation of their country. Over the course of that single day, the French Republic arrested over 10,000 Algerians and attempted to block the demonstration. But eventually several thousand Algerians managed to march through the center of Paris. After marching peacefully down the streets, the police encircled the crowd and began to shoot at them. Over 200 people were killed all across the city. Several dozen were thrown into the River Seine in front of Notre Dam cathedral and then shot from the shore. All of this happened in the center of Paris, not far from the most recent massacre in the beloved City of Light.

And so now a flag of the French Republic flutters atop the Space Needle in Seattle. A local journalist named Charles Mudede happened to notice this, and told the readers of the The Strangers SLOG column that it was racist. And indeed it is, but no more so than the American flag waving in front of City Hall right now. Both of these red, white, and blue flags have long represented colonial genocide, slavery, and murder. It is truly sad to witness another spectacle like this. If one wanted to express their solidarity with the victims of the most recent attack, they should not use a tyrannical and racist flag to do so. It is simply mad. 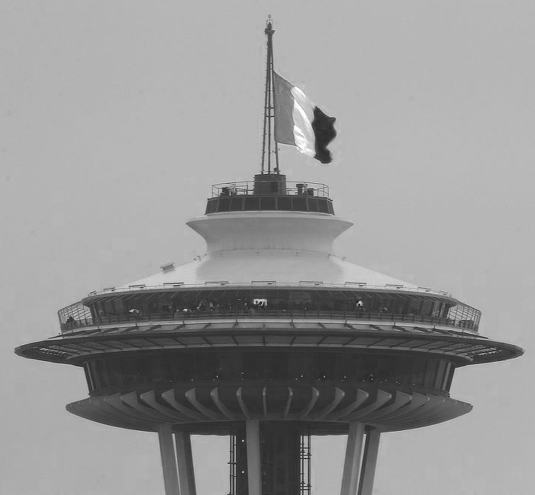